Father Linus Umoren, CM, was born on October 20, 1969, in Akwa-Ibom State, Nigeria. He joined the Congregation of the Mission (The Vincentians) in 1988 and made his first vows, bon propo as it is called, in 1989.

Father Linus obtained his philosophy degree from St. Joseph Major Seminary, Ikot Ekpene, and a degree in Sacred Theology from Bigard Memorial Seminary, Enugu in Nigeria, in 1997. He made his final vows on September 27, 1996 and was ordained a priest for the Congregation of the Missions on June 29, 1997, the feast day of Saints Peter and Paul.

Father Linus holds a master’s degree in Clinical Psychology and psychotherapy from the Gregorian University in Rome. He also holds a certificate in Spiritual Direction.

Since his ordination, Father Linus has served as the director of different seminary formation levels in Nigeria (Novitiate 1997, Philosophy 2001, Theology 2007-2014). In Rome, he served as the coordinator of the international Vincentian students (2004-2006). He was the provincial director of vocation from 2011 – 2014 and a member of the provincial council from 2010 to 2012. Father Linus also served briefly in the diocese of Buffalo, New York as an associate pastor at Prince of Peace Parish (now St. Vincent de Paul parish), Niagara Falls, Buffalo, 2006-2007.

Since his return to America in 2014, Father Linus has served as the Pastor of Holy Family Church in Cahokia, IL, and Sacred Heart Church in Dupo, IL until August 2020. He has been a member of the Presbyterial Council since 2019. Father Linus is currently completing his doctoral degree in homiletics in the Aquinas Institute of Theology, St. Louis, MO.

He enjoys reading, traveling, writing, and sports (soccer and volleyball). His two published books are The Radical Christian (2000) and Homosexuality and Lesbianism: Un-African, Sickness, or a different way of Loving? (2013). Father Linus is a fan of the English Manchester United soccer team. He is also a “secondary fan” of Saint Louis’ Cardinal baseball team. 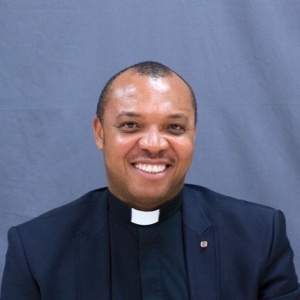